We are a state recognised, privately funded primary and secondary school, providing all-day tuition. We accompany our students on their journey from their very first day at school to their school leaving qualifications.

We identify and encourage individual talents and skills in our students, with the aim of enabling them to take pleasure in their achievements and carve out their own personal place in the community. We want our students to look back fondly on their time at school and remember it as a positive experience.

Selecting the appropriate school for your child is both an exciting and daunting experience. The choice of school sets your child on course for the future. At PGH, we take all the time you need and are happy to advise and answer your questions. Contact us to make an appointment for a visit with your child. 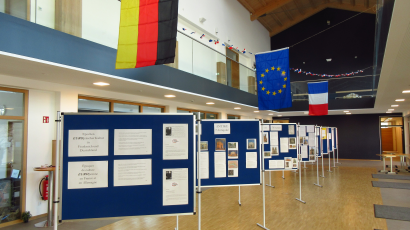 The German-French week 2022 at the PGH

On January 22, 1963, Germany and France signed the French-German Treaty of Friendship.

A bilingual German-French exhibition was set up in a joint effort for the school family in the hall on the 1st floor of the new building. Topics were traveling in France with information and photos on different regions and cities of France as well as the common currency of the European Union, the euro. With regard to the euro, it was all about the architectural motifs on the banknotes. These represent the epochs of European culture from antiquity to the present day, from which Europe's transnational uniqueness is fed. The aim of the exhibition was to make this bridge of culture clear using the example of France and Germany. For this purpose, the motifs of the euro notes were compared with important buildings in both countries. Similar things and different things emerged. A glimpse into the history of both European countries became possible. Drawn impressions of the Romanesque and Gothic periods from art classes in the 7th grade enriched the perspective.

At the opening of the exhibition on January 24th, 2022, French chansons on the subject were played in the short breaks.

The café also opened on this day for the first time, drawing attention to the Franco-German friendship in gastronomic terms with croissants and "jambon-beurres".

Our participants in the art competition under the motto: "An egg lands out of the universe" and "Works of art made from masks"

thanks to all students who took part in the competition. You have created great works of art! As well as a big thank you to the college of elementary school and high school.

The works of art can be viewed in the new school building until the end of January 2022.